When gas hit $4 a gallon, I decided to bike to work. I live a little over 5 miles from work, and between stop lights and everything else, I can bike there or back in about 25 minutes. For comparison, in the morning, I can drive in in about 15 minutes (since the traffic is so low), but coming home in the afternoon (even leaving at 4:00), it takes me 25 minutes, so I only spend about 10 additional minutes on the commute. In addition, I save quite a bit on gas (somewhere in the neighborhood of $40/month) and get in over 4 hours of exercise per week. Luckily, the people I work with are in to biking a lot (2 others bike in every day too), so it’s a pretty bike friendly place to work.

Anyway, a friend and I were discussing alternative fuels, and in this case, we were talking ethanol. He drives a small motorcycle, and figured that he could get around 50 MPG going 50 MPH on it using ethanol. So, I got curious and started figuring out some numbers.

As a side note… I love math. I got a minor in math, and do math puzzles for fun. I suspect you would have guessed this by the time you get to the bottom of this post.

Anyway, these calculations are just for fun of course… nothing too scientific, so take them with a huge grain of salt.

First off, I went to the internet to find out some information, and learned that ethanol contains 150 calories/ounce, and an ounce is 0.0078125 gallons. A resting human metabolism burns around 75 calories/hour, and an easy biking (10 mph) metabolism is around 200 calories/hour for a 150 pound person. So, biking burns about 125 calories/hour in addition to the normal resting metabolism.

Using simple dimensional analysis (I’ll write about that sometime!), you get the following:

Of course, I’m not suggesting that I (or anyone else) should use ethanol as their main source of calories, but it’s an interesting result.

I decided to take it a bit further. If you want to go twice as fast, you don’t burn twice as many calories. Instead, it goes up at some exponential rate. So, back to the internet I learned that more strenuous biking (20 MPH) burns around 540 calories/hour (or 465 after you subtract resting metabolism).

Plugging these results in, we get:

A professional biker in the Tour de France bikes 4 around hours a day and burns between 6000 and 8000 calories per day. If you use 7000 as a happy medium, subtract the normal daily metabolism of 2200 calories per day, and divide the result over 4 hours of racing (and yes, I realize that that is a huge number of assumptions and over simplifications), that works out to be around 1200 calories per hour. The average speed this year was 25 MPH. Plug these numbers in and we get:

Obviously, I don’t believe that a biker could actually go 50 MPH (as fast as the motorcycle that this all started with), but what if they could?

The first thing I did was to plot MPH vs. the log of calories burned per hour (since this is exponential). Then I extrapolated to 50 MPH. I realize that extrapolating outside of the range of the data is a horrible practice, given how far outside of the data (which consists only of 3 very approximate data points), the result is almost meaningless… but who cares. This is just for fun. 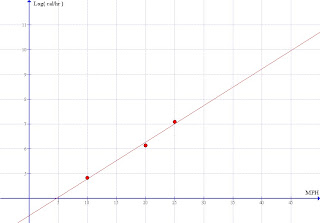 The extrapolated value gives approximately 10.75 at 50 MPH. This corresponds to 46,600 calories. Plugging these numbers in:

Anyway, just some fun numbers to think about…